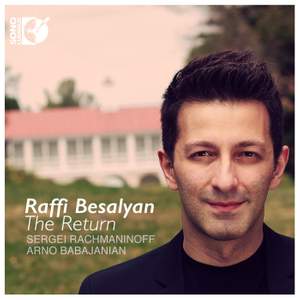 Besalyan is an artist who does justice to each of these Rachmaninov works, and the unfamiliar Babajanian morsels are an appetising addition to an appealing release — MusicWeb International, 13th June 2016

No. 6 in E-Flat Major: Andante

No. 1 in C Minor: Allegro agitato

No. 5 in E-Flat Minor: Appassionato

Rachmaninov: Variations on a theme of Corelli, Op. 42

Thoughts of home dominate much of the music Raffi Besalyan performs here. Rachmaninoff’s "B-Minor Prelude" was inspired by The Return, a painting by Arnold Böcklin, and although it was written before his emigration the work was a constant companion in his exile, a favorite for his own recitals and a reminder of his years in Russia. Similarly, the folk-inspired piano music of Arno Babajanian recalls a distant homeland. Based in Moscow for much of his adult life, Babajanian looked back to his native Armenia in music that mixed the folk idioms of his people with the virtuosic pianism of the Russian school. And now Besalyan, an Armenian pianist based in the United States, brings their music together in a program infused with warm memories, evocations of far off places,

and reminders of earlier times.

Both Rachmaninoff and Chopin can be heard as influences in the music of Arno Babajanian. His studies in Moscow from 1938 exposed the Armenian composer to a wide range of styles, and the greater political freedom of the Khrushchev period when he began his professional career in the 1950s allowed him to explore many of these ideas in his works. The "Piano Trio in F# Minor", written in 1952, established his credentials as a composer of concert music, but he was also well-known for his cinema work, and particularly for the title song he wrote for the film Song of the First Love released in 1958. The four works presented here demonstrate how Babajanian was able to incorporate aspects of Armenian musical identity into the Russian piano idioms he had become acquainted with through his studies in Moscow. The line of inheritance from Chopin via Rachmaninoff is evident in the “Prelude”. The slow movements of Rachmaninoff’s concertos are reflected in the “Melody” that follows. “Elegy” was written towards the end of Babajanian’s life in 1978, composed in memory of fellow Armenian composer, Aram Khachaturian. The final work in the program, “Vagharshapat Dance,” is an early composition dating from 1947. It is one of Babjanian’s most popular works, skillfully infusing distinctively Armenian colors with an approach to piano figuration inherited directly from Rachmaninoff.

Armenian-born American pianist Raffi Besalyan made his formal New York debut in Carnegie Hall after winning the Artists International Competition, and was subsequently invited to perform at Merkin Concert Hall on the Artists International “Outstanding Alumni-Winners” series. Most recently Besalyan made his Chicago debut in famed Orchestra Hall at Symphony Center as the featured Guest Artist for the Chicago International Music Festival and was also interviewed by Wisconsin Public Radio’s Norman Gilliland on “The Midday”. Raffi Besalyan has established an international reputation as a magnetic and passionate performer. Active as a recitalist, orchestral soloist, and chamber musician, Besalyan appears in many important

Besalyan is an artist who does justice to each of these Rachmaninov works, and the unfamiliar Babajanian morsels are an appetising addition to an appealing release