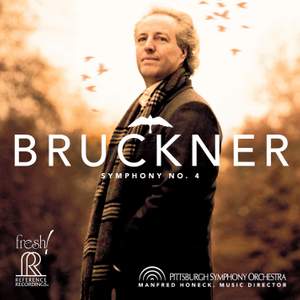 the sleek, sweetly yielding strings of the Pittsburgh Symphony Orchestra and its characteristically full-throttle brass section [offer] playing that calls to mind the halcyon days of William... — Gramophone Magazine, May 2015 More…

Anton Bruckner's Symphony no.4 in E-flat major ('Romantic') is one of the composer's most popular works. Manfred Honeck and the Pittsburgh Symphony Orchestra offer us a fresh and powerful new interpretation of this great music.

This release is the third in the highly acclaimed 'Pittsburgh Live!' series of multi-channel hybrid SACD releases on the FRESH! series from Reference Recordings.

For more than 116 years, the Pittsburgh Symphony Orchestra has been known for its artistic excellence. It has a rich history of the world’s finest conductors and musicians. Past conductors include the legendary names of Reiner, Steinberg, Previn, and Maazel. This tradition was furthered in the autumn of 2008, when celebrated Austrian conductor Manfred Honeck became Music director of the Pittsburgh symphony orchestra.

The PSO is critically acclaimed as one of the world’s greatest orchestras and has completed more than 36 international tours, including 20 european tours, eight trips to the far east, and two to south america. The Pso was the first American orchestra to perform at the Vatican, in January 2004 for the late Pope John Paul II, as part of the Pontiff’s silver Jubilee celebration.

This release and the entire 'Pittsburgh Live!' series are recorded and mastered by the team at Soundmirror, whose outstanding orchestral, solo, opera and chamber recordings have received over 70 Grammy nominations and awards!

the sleek, sweetly yielding strings of the Pittsburgh Symphony Orchestra and its characteristically full-throttle brass section [offer] playing that calls to mind the halcyon days of William Steinberg's directorship…sheer magnificence is never in question.

With the Pittsburgh Orchestra giving such a penetrating reading under the inspirational Honeck, Bruckner’s music is remarkably well served.