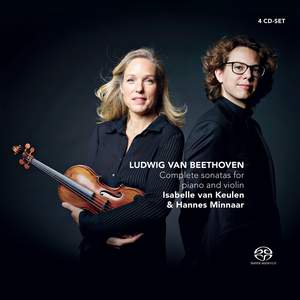 The original title given to the first edition of Beethoven’s Sonata No. 9 opus 47 known as the Kreutzer Sonata, refers to the piece as a work for “pianoforte with violin obligato”. This clearly shows Beethoven’s revolutionary thinking on priorities as regards the piano-violin combination, a reflection it would seem of the fact that the composer saw the music as a vehicle for his own virtuoso skills on the keyboard. The first eight violin sonatas, opus 12, nos.1-3, opus 23 and 24, and opus 30, nos.1-3, were composed between 1798 and 1802, but then, after composing the “Kreutzer” Sonata in 1803 he set the genre aside until 1812, the year in which the opus 96 sonata in G major was written.

Isabelle van Keulen has an established reputation as a violinist and viola player of world-class stature. Over the last few years she has released recordings on Challenge Classics with the pianist Ronald Brautigam of music by Shostakovich (CC72071), Richard Strauss, Respighi and Rota (CC72307), Grieg, Elgar and Sibelius (CC72171), Prokofiev (CC72580), and with her own Isabelle van Keulen Ensemble, Piazzolla (Tango!, CC72660).

Hannes Minnaar made his debut with the Netherlands Symphony Orchestra under the baton of Alessandro de Marchi at the age of 17. Since then he has performed with many leading orchestras including the Netherlands Radio Philharmonic Orchestra, Orchestre de la Suisse Romande, and the Royal Flemish Philharmonic, and worked with conductors such as Marin Alsop, Herbert Blomstedt, and Frans Brüggen. In 2013 he made his first solo appearance with The Royal Concertgebouw Orchestra in a performance of Beethoven’s Fourth Piano Concerto. Hannes Minnaar is also active as a chamber musician and is a member of the award-winning Van Baerle Trio.