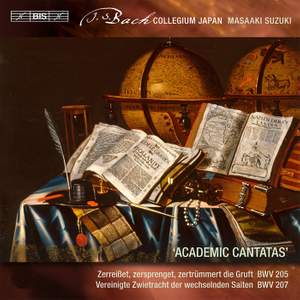 This week it's David's turn to attempt the impossible - whittling down the huge and distinguished choral discography of JS Bach and picking out the very best.

The two works on this disc perfectly illustrate a particular type of secular cantata, the so-called ‘dramma per musica’. In such works the libretto is constructed dramatically, and the singers embody various roles, such as gods and other characters from antiquity, and allegorical figures. The parallel with opera is apparent, although the ‘drammi per musica’ do without any scenic element. Bach primarily used the form in works intended for princely tributes or academic festivities: educated audiences could be expected to recognize the characters and literary traditions involved. Both cantatas recorded here are ‘academic’ cantatas, composed in honour of eminent members of the faculty at the University of Leipzig. BWV 205 celebrates the name day of Dr August Friedrich Müller (3rd August 1725), and takes us to Aeolia, where Aeolus, the King of the Winds, holds the mighty autumn storms captive until it is time to let them loose on the world. To prevent any disruption of the celebrations for Dr Müller, the goddess Pallas, among others, entreats Aeolus to keep the storms in check for a while longer. Grudgingly he concedes to her wish, but only after singing an aria full of splendid bluster (Wie will ich lustig lachen…). One year later, Bach composed the cantata BWV 207 for the appointment of Dr Gottlieb Kortte as ‘professor extraordinarius’. The young jurist enjoyed particular popularity among the young academics, who probably were the commissioners of the cantata. In this work it is virtues such as Diligence and Honour which take musical shape, singing the praise of the eminent academic. The cantata closes with a chorus, Kortte lebe, Kortte blühe!, wishing the new professor a long and flourishing life – unfortunately to little avail, as Dr Kortte died only five years later, at the age of 33.

Bach Collegium Japan's trumpets and horns mount a thrilling assault to play without modern drilled holes to fix their intonation to the expectations of modern ears...The outstanding moment is Gratitude's 'Ätzet dieses Angedenken', in which Robin Blaze's gentle singing is accompanied by a lyrical pair of flutes.

Unashamedly worldly works, written to honour the name-days of faculty members at the University of Leipzig, these Academic cantatas are no less enjoyable for their pragmatic origins. The virtues Digilence and Honour, as well as the deities Pallas and Aeolus, take to the stage to sing the praises of Doctors Müller and Kortte, and Masaaki Suzuki's Bach Collegium Japan are on their usual fine form.