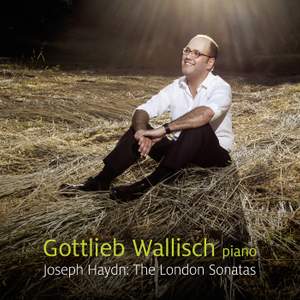 His technique and touch are immaculate, his tempos are judicious and, without over-emphasis or eccentricity, he always phrases meaningfully...And his account of the alternatively plaintive and... — BBC Music Magazine, December 2014, 4 out of 5 stars More…

Famed for his clarity of line and purity of tone, Gottlieb Wallisch moves from Mozart to his contemporary Haydn for his fourth recording with Linn.

Wallisch launched his international career by winning the ‘Joseph Haydn Prize’ as well as first prize at the prestigious Stravinsky Awards at the age of just sixteen.

He celebrated Haydn’s anniversary year in 2009 by giving a critically acclaimed cycle of concerts in the Musikverein, Vienna dedicated to the composer.

Haydn’s famous London Sonatas can be viewed as the distillation of the composer’s entire sonata-writing experience; Gottlieb perfectly captures his characteristic humour, energy and spiritedness.

Sonata No. 60 was written for an instrument of greater tonal range than the Viennese instruments of the day, with a wider palette of specified dynamic possibilities and pedal effects.

With a striking two-movement format, asymmetrical phrases and unusual accents Sonata No. 61 was ahead of its time, breaking the limits of traditional sonata form.

Often described as a symphony for the piano, Sonata No. 62 has frequently been praised as Haydn’s ‘opus summum’ due to its large-scale form, diversity of expression and its virtuoso requirements. Named a Steinway Artist in 2012, Gottlieb Wallisch is a respected artist in the Viennese piano tradition. Gottlieb Wallisch has performed with many leading orchestras including Royal Liverpool Philharmonic, the London Philharmonic Youth Orchestra and the BBC National Orchestra of Wales. He has performed at prestigious London venues Wigmore Hall and Queen Elizabeth Hall.

His technique and touch are immaculate, his tempos are judicious and, without over-emphasis or eccentricity, he always phrases meaningfully...And his account of the alternatively plaintive and fanciful, but ultimately tragic Variations in F minor is the more powerful for refraining from over-milking the pathos at the end.

In the F minor Variations, Wallisch's poised pianism, suave tempo relationships and keen attention to the music's bountiful harmonic inventiveness offer much to savour...Better still is Wallisch's fluent, rhythmically pointed and heartfelt rendition of the Andante in the remote key of E major.