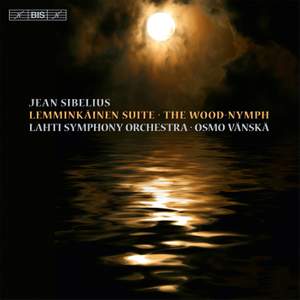 As ever with Vanska, the interpretation is full of incidental insights, the Lahti Symphony Orchestra's playing captured in excellent sound. — Gramophone Magazine, August 2014 More…

I. Lemminkainen and the Maidens of the Island

II. The Swan of Tuonela

The source of the Lemminkäinen Suite is the Finnish national epic Kalevala, and its four movements – of which ‘The Swan of Tuonela’ is often performed separately - tell of the adventures of the young hero Lamminkäinen.

In comparison, The Wood-Nymph only had its first complete performance in 1996. This was given by the performers on this disc, a team which has become synonymous with top-flight idiomatic Sibelius performances.

As ever with Vanska, the interpretation is full of incidental insights, the Lahti Symphony Orchestra's playing captured in excellent sound.

Vänskä’s performance projects powerfully the first few minutes of the score; his reading has biting urgency and sweep...An abundance of detail registers and at the same time the listener gets the Big Picture too. In a word, the sound is thrilling.