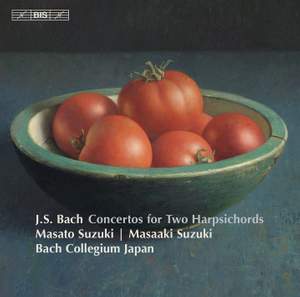 Masaaki imagines these works very much as chamber creations but presented with a warm resonance which will suit almost all constituencies...both Masaaki and Masato rejoice in the simple elegance... — Gramophone Magazine, August 2014 More…

Three double concertos for harpsichord by Bach survive, all dating from around 1736, and all arrangements of earlier compositions. BWV 1060 is thought to have originated as a now lost double concerto for oboe and violin, while BWV 1062 is a reworking of the well-loved concerto for two violins. Unlike these two works, BWV 1061 was composed for two harpsichords from the outset, but probably started out as a concerto without orchestral accompaniment – this will have been added later. Performing these works, with a quintet of string players from the Bach Collegium Japan, Masaaki Suzuki is joined by his son Masato. For the present disc Masato Suzuki has also taken a page from Bach’s own book, in arranging the composer’s Orchestral Suite No.1 for two unaccompanied harpsichords.

Masaaki imagines these works very much as chamber creations but presented with a warm resonance which will suit almost all constituencies...both Masaaki and Masato rejoice in the simple elegance and devotional belonging which these pieces afford.

This is a very fine release, the BIS engineering to be relished in stereo as well as in the added space and sense of detail you have from the 5.0 SACD set-up. This is one case in which feeling as if you are amongst the musicians is nothing but pleasurable.