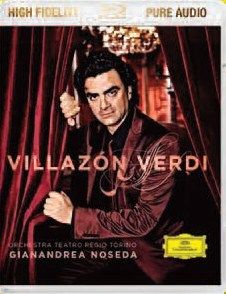 Verdi: I due Foscari / Act I

Released to coincide with Verdi’s anniversary year (1813 to 2013.) A unique and carefully-crafted personal selection of Verdi arias and songs that takes us on a musical journey from Verdi's earliest compositions 1838 to the very last he wrote for the tenor voice: the beautiful aria from Falstaff "Dal labbro il canto estasiato vola" 1893

Recorded in Turin, with the world-class Orchestra del Teatro Regio di Torino, and under the direction of award-winning conductor, Gianandrea Noseda.

Rolando owes his international breakthrough to Verdi: he has made opera history in La Traviata, Rigoletto and Don Carlo, as well as being a celebrated interpreter of the breath-taking Requiem. This is Rolando’s own personal tribute to one of history’s most popular composers.

A physical high-resolution Pure Audio format, using existing Blu-ray technology; no video content. It is intended for playback on any Blu-ray disc player, giving it an advantage over previous high-definition standards (such as SACD) which required specific hardware; navigated with the remote control of your Blu-ray player.

NB: This product is audio-only: there are no images or video-content. It also requires a Blu-ray player and will not play on standard CD-players.