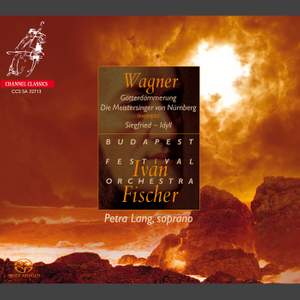 [Fischer] and his Budapest Festival Orchestra certainly acquit themselves rather well. Their tempos are sometimes slow enough to please Klemperer and Goodall fans, but they're lightened by the... — BBC Music Magazine, August 2013, 5 out of 5 stars More…

Recording of the Week,  Wagner from Iván Fischer and the Budapest Festival Orchestra

Wonderfully balanced and beautifully characterised accounts of the Overture to Die Meistersinger, the Siegfried Idyll and three excerpts from Götterdämmerung, including an Immolation Scene of laser-sharp accuracy and thrilling power from Petra Lang.

Wagner is the giant among composers by reason of the fact that he created his own world. Whereas others interpreted ancient and familiar mythology, Wagner created his own myth. Whereas others composed to librettos by poets, Wagner wrote his own texts. He even built his own opera house, which had to be different and innovative. Wagner was the greatest creative genius in music history.

And yet this superhuman giant also had a sense of humour, clearly audible in the wonderfully constructed Meistersinger overture. And he created intimate, sensitive lyricism, which moves us deeply in his Siegfried-Idyll. This lyricism is the most important aspect of Wagner's music: Brünnhilde's beautiful, longing melody which shines through the huge flame that absorbs both her and the collapsing world.

[Fischer] and his Budapest Festival Orchestra certainly acquit themselves rather well. Their tempos are sometimes slow enough to please Klemperer and Goodall fans, but they're lightened by the Hungarians' fresh, precise playing...[Lang] makes a memorably elegiac if slightly wild Brünnhilde, unleashing quite a cataclysm.

Fischer's work stands as some of the finest new conducting yet put on disc in Wagner's bicentenary year...[Lang's] is a voice and personality engaged in the drama: dynamics, tone, colour all serve Brünnhilde's dark, serious ride into the fire

The programme covers familiar territory, but when the music is so well played, so intelligently conducted and so beautifully recorded, it makes a considerable impact...[Lang[ doesn't sound comfortable in this part...Hoever, the first half of this disc is far more successful...and Fischer encourages playing of great refinement and transparency

Fischer and his Budapest players retain much of the chamber music quality in this recording, with wonderful balance and beautifully characterised wind solos. Fischer’s natural ebb and flow is hugely persuasive...Usually regarded as a mezzo, [Lang] has no problem with the high notes, displaying laser-sharp accuracy and a thrilling power. But what impresses me even more are the tender moments

a revelatory contribution to the bicentenary celebrations...Lang is maybe not a natural Brünnhilde but laser-sharp in the immolation scene, while Siegfried's funeral march is hard-edged, incisive, its climax absolutely shattering: really distinctive playing.

anything [Lang] lacks in vocal heft is balanced by her incisive delivery. But the orchestra has the last word, knocking us sideways with the music’s lyrical beauty and dramatic power. Wagner in a nutshell, this, and it’s irresistible.