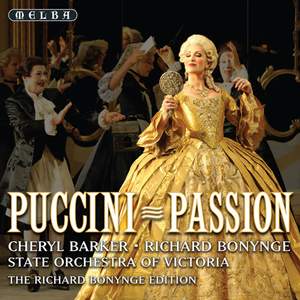 Cheryl Barker first broke the hearts of audiences worldwide as Mimì in Baz Luhrman’s imaginative production of La bohème. In Puccini ≡ Passion the radiant Australian soprano delivers beguiling performances in a panoply of Puccini’s heroines in favourite arias, accompanied by the State Orchestra of Victoria under the baton of Richard Bonynge.

Opera expert Rodney Milnes comments in the booklet: “Puccini famously liked to write about "little women", but he gave them "big" music, which is one thing that makes Cheryl Barker so ideal an interpreter of his soprano roles ... her lyric soprano, with an indefinably sweet vibrancy built in to the tone, adds immeasurably to her appeal. With that vibrancy comes a sense of vulnerability, which helps her bring the characters alive in both vocal and dramatic terms ... This most welcome disc allows her to present an overview of Puccini's women from the very beginning.”

Issued for the first time on SACD, this disc is for all lovers of Puccini, encompassing his most popular soprano arias from Manon Lescaut, Tosca, La bohème and Madama Butterfly, one of Barker’s favourite roles, as well as arias from Le Villi, Edgar, La rondine, Suor Angelica, Gianni Schicci and Turandot. Barker ends with two little known treasures, the folksong-like ‘E l’uccellino’, and ‘Sole e amore’, an 1888 song whose melody Puccini later re-used in La bohème. And in a departure from his usual repertoire Richard Bonynge brings fresh imagination and sparkle to Puccini’s masterful orchestral palette.

Cheryl Barker’s most recent CD, also for Melba and released in 2011, was Pure Diva (MR301129), a very personal tribute to her teacher and fellow Australian soprano, the great Dame Joan Hammond.