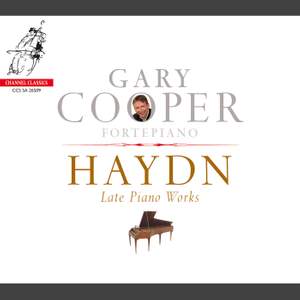 Gary Cooper is now established as one of the foremost ambassadors of the harpsichord and fortepiano - in particular, as an interpreter of Bach’s & Mozart’s keyboard music – and as a director of period performance in concert, and in opera. Gary is ‘Artist in Residence’ of the exciting Belgian period instrument ensemble, B’Rock, directing orchestral and opera productions, recordings, and is guest artistic director of a new festival in Bruges. This coming season, Gary appears at major festivals such as the Flanders Festival, the Bruges, Utrecht, Potsdam and Innsbruck Early Music Festivals and throughout the UK.

The Duo partnership of Gary Cooper with Rachel Podger has taken them worldwide. Their recordings, with Channel Classics, of Mozart’s Complete Sonatas for Keyboard & Violin has received countless awards and accolades, including multiple Diapason d’Or awards and Gramophone Editor’s Choices, and hailed as ‘benchmark’ recordings.

"The inspiration for this recording was derived from that all-too-rare occurrence: a perfect marriage of instrument and composer's music. The language of Haydn's later keyboard writing, containing such infinitesimal subtlety of expression, inflection, dynamic range, colour, and every mood under the sun, from tempest to sunny wit, seems to me perfectly matched by the gem of a piano used for this recording,dating from Vienna c.1785. In truth, I have never encountered an instrument capable of such breadth of touch and response from this period: to my mind, Haydn's last, and greatest, keyboard works, richly deserve being heard on such a piano, in order that the fullest range of expression and depth of imagination contained in these remarkable pieces may be brought alive.” Gary Cooper

Interpretatively, Cooper offers a fascinatingly complementary approach to Andreas Staier in his outstanding late-Haydn box. …Staier… proves on the whole stricter, crisper, more clear-cut in his dynamic contrasts… Cooper is more poetic in his phrasing, more sensitive in colour gradations, freer with the text as regards decoration, added octaves in the bass, and so on. ...of fortepiano Haydn should treat themselves to both Cooper and Staier: each enhances the other.

…Gary Cooper… opens with the formally inventive C major Sonata (HobXVI/48) and imbues the contrast between solemnity and skittering brilliance with all the drama of a Mozart fantasia. The inclusion not only of the masterly F minor Variations but also a rarity - the touching set based on the slow movement of Haydn's Emperor Quartet - is another plus.