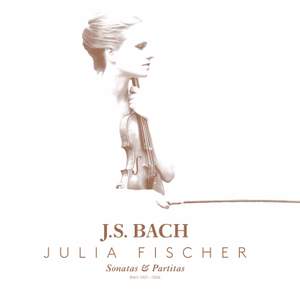 Classic accounts by Milstein and Grumiaux have been usurped by this extraordinarily gifted newcomer — BBC Music Magazine, Proms issue 2005 More…

Bach’s astonishing and unsurpassed works for solo violin are glowingly realised in award-winning performances by Julia Fisher in this re-issue from PENTATONE, also available in an LP version. Bach’s remarkable Sonatas and Partitas for solo violin are revered for their boundless inventiveness, technical ingenuity and emotional depth. With their brilliant preludes, stately dances and complex four-part fugues, the demands on the performer are enormous – from rapid scale passages, double stopping and arpeggios, to the skill and concentration required to create the illusion of separately moving and interweaving voices. The set is full of surprises. Sonata No. 3 contains a colossal fugue of increasing complexity and difficulty (and at over 350 bars, one of his longest). Partita No. 3 is one of Bach’s sunniest works, with the virtuoso Prelude and the charming Gavotte being regularly performed as encore pieces. Most famous of all is the legendary Chaconne from Partita No. 2, a kaleidoscopic series of variations as deeply felt and cathartic as anything Bach wrote and an incontestable milestone in classical music. Julia Fischer’s recording for PENTATONE was showered with praise upon its first release in 2005. “Classic accounts by Milstein and Grumiaux have been usurped by this extraordinarily gifted newcomer” enthused BBC Music Magazine. “Her mastery is beyond question,” affirmed Gramophone magazine “her ability to trace a smooth, even line a source of pleasure itself.” it also achieved the rare distinction of garnering three of France’s most prestigious awards: the Diapason d’Or from Diapason; the CHOC from Le Monde de la Musique; and the highest rating from Classica-Repertoire. Julia Fischer’s extensive recordings for PENTATONE have earned major recognition and awards. This re-issue is launched simultaneously with an exquisitely designed LP edition. Julia Fischer plays on an italian violin made by Giovanni Battista Guadagnini, dating from 1742.

This is a masterly achievement from one of the most impressive of the younger generation of violinists.