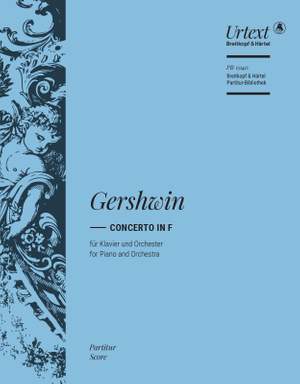 After achieving sensational success with the musical Lady, be good!, with evergreens such as Fascinating Rhythm and The Man I love, as well as with his Rhapsody in Blue, Gershwin premiered his Concerto in F for piano and orchestra as a soloist at Carnegie Hall in 1925. Now, the new superstar of Broadway had also arrived at the center of New York’s classical music scene.

In its eventful history, the work went through numerous changes, cuttings, arrangements, many of which doubtful and unauthorized. Even the first and so far only printed orchestral score, “edited by” Frank Campbell-Watson, published in 1942 five years after Gershwin’s death, contains many unauthorized interventions.

Through years of research, editor Norbert Gertsch has succeeded in ridding the work of all unauthorized additions and alterations and thus reconstructing an Urtext in its original literal sense from the complex source material – from autograph sketches to early recordings. The first text-critical edition of the work is a joint production of Breitkopf (score/orchestral parts) and G. Henle Verlag (piano reduction).