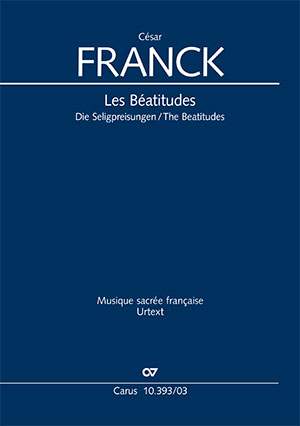 César Franck (1822–1890) is now regarded as one of the most important French composers and organists of his time. “Les Béatitudes”, his monumental oratorio setting the text from Jesus’s Sermon on the Mount (Matthew 5,3ff.), is regarded as his most important work and is on an equal footing with the great oratorios of the 19th century. But Franck himself did not live to hear the extremely successful first performance in summer 1891.

Through its symmetrical dramatic structure, the work conveys the idea of a great arch. A short prologue is followed by eight movements in which the words of Christ are contrasted with earthly scenes. The choir has an important role as commentator on the events. The conclusion of the work is an overwhelming hymn – the entry into paradise.

With this Carus edition, the “Béatitudes” is published in a modern, thoroughly-researched Urtext edition for the first time. The orchestral scoring is typical of the French orchestra of the time. Both the number of soloists and the size of choir required can be reduced by skilful allocation of the roles. The score offers many practical performance suggestions, based on the editor’s own experience in trying these out. A new vocal score, prepared with ease of playability in mind, replaces the historic reprint edition previously available from Carus. Ambitious amateur choirs can also perform this magnificent work.