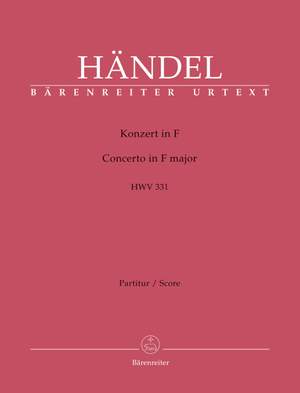 Handel’s Concerto in F major (HWV 331) was long considered a variant of two movements from the three suites of his “Water Music” (HWV 348-350). Recently our understanding of the “Water Music” had to be thoroughly revised owing to new scholarly discoveries. Not only did the structure of the three suites prove to be unhistorical, but Friedrich Chrysander’s 19th-century view turned out to be correct: the two “variants” actually constitute an independent concerto.

In musical terms, HWV 331 is related to two movements of the “Water Music” and is frequently performed alongside them. Now it is available for the first time in a performing edition based on the already revised volume of the “Halle Handel Edition”, which reflects the current state of scholarship concerning the complex source tradition of the “Water Music” and the Concerto HWV 331.