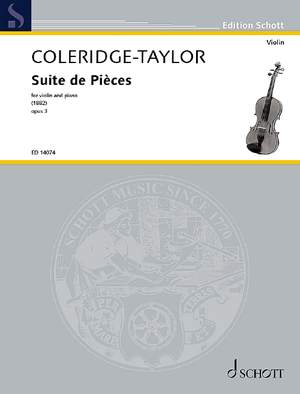 for violin and piano

Samuel Coleridge-Taylor was paid three guineas for the publishing rights to his Suite de Pièces by Schott & Co. London on 24 December 1892 when the composer was just 17 years old. In the following year the work was published by Schott Music's German office in versions for both violin with piano and violin with organ. Coleridge-Taylor was born in London and brought up in Croydon. He learnt to play the violin, was recognised as a child prodigy and at 15 was awarded a scholarship to study at the Royal College of Music with Charles Villiers Stanford, where he was a contemporary of Holst and Vaughan Williams. Coleridge-Taylor described himself Anglo-African and, despite support from his colleagues, faced racism throughout his whole career. In spite of this prejudice and his tragically early death in 1912 aged just 37, he enjoyed great success during his lifetime and his music was performed at the Proms no less than 116 times between 1898 and 1939. In contrast, since 1940 his music has only been heard there on eleven occasions. Like many works, at some point in the past Suite de Pièces became out of print. Schott Music is very proud to present this new modern performing edition of the version for violin and piano. Errors and inconsistencies from the first edition have now been corrected.