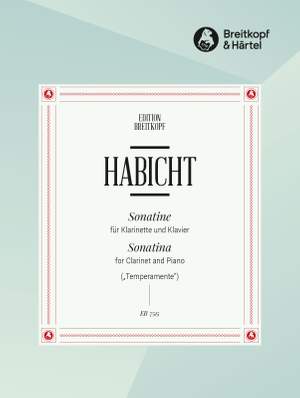 Günter Habicht composed music for folk instruments and contributions to educational literature as well as works for wind orchestra, chamber and orchestral music, including the “Sinfonietta”, published in 1964 by VEB Breitkopf & Härtel Musikverlag Leipzig, and the award-winning “Quartettino 1969” for wind instruments, created for a composition contest organized by the Association of Composers and Musicologists on the occasion of the GDR’s 20th anniversary. With an easy piano accompaniment, the sonatina for clarinet and piano “Temperaments”, written in the same year, is particularly aimed at more advanced music students and amateur musicians. Each of the three movements represents one temperament (1. sanguine type, 2. melancholic type, 3. choleric type) that needs to be worked out during the rehearsals.

From 1935 to 1939, Günter Habicht (1916–2010) studied with Herbert Viecenz and Boris Blacher (music theory and composition) and with Walther Meyer-Giesow and Ernst Hintze (conducting) at the Dresden Conservatory. In 1951, Günter Habicht taught at an elementary school in Leipzig, and in 1952, he was appointed specialist lecturer for music at the Zentralhaus für Volkskunst. From 1955 to 1981, he was a teacher of music theory and clarinet at the Leipzig City Music School.