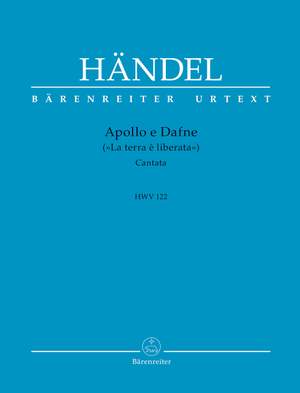 The episode from Ovid‘s “Metamorphoses” in which Daphne attempts to escape Apollo’s advances by turning into a laurel tree, causing the devastated god to weave a laurel crown in memory of the nymph, has inspired the masterworks of many artists. Gian Lorenzo Bernini, whose famous marble sculpture is housed in the Galleria Borghese in Rome, is only one example of this. Many composers set this myth to music including young George Frideric Handel with his grand-scale dramatic cantata “Apollo e Dafne”. The composer started working on the work shortly before leaving Italy in 1709, most likely finishing it the following year in Hanover.

Bärenreiter now presents a vocal score of the opera-like cantata, the highlights of which include Dafne’s aria “Felicissima quest’alma” (accompanied by solo oboe) and Apollo’s famous lament “Cara pianta”.

This Urtext edition is based on the “Halle Handel Edition”, offering a Foreword (Ger/Eng) as well as literal translations into German and English.