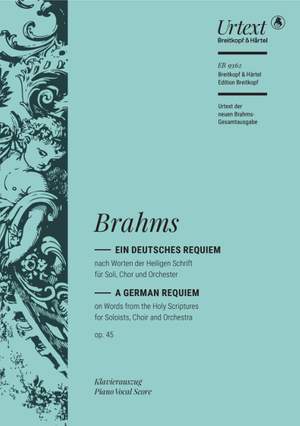 The German Requiem is one of the world’s most famous requiems, even though it does not set the customary requiem text to music. Brahms did not want to follow the Latin Catholic funeral mass, addressing the Last Judgment’s terror and sinful human beings’ redemption through death on the cross. His attention, on the contrary, was on Biblical texts that focus on human transience and comfort: comfort to the bereaved and comfort to all who fear death. To some extent, it could be called the epitome of Brahms's work. In the relevant volume of the new Brahms Complete Edition, on which this new practical edition is based, editors Michael Musgrave and Michael Struck clear up all sorts of “legends,” errors, and erroneous readings. Brahms’s subsequent minor compositional changes are taken into account, poor decisions in previous editions are corrected, and the Bible texts sung contain writing and meaning corrections. In addition, the texts elucidate many myths about the composition’s origin. Thus, this Urtext edition creates a fresh perspective on the “People’s Requiem,” as Brahms would have preferred to call the composition.