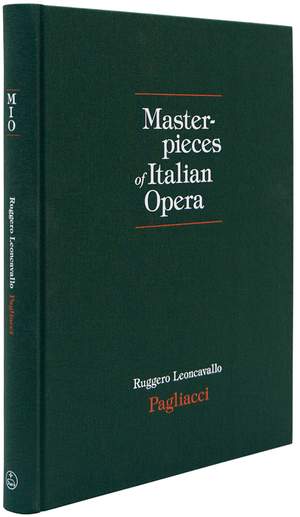 The verismo opera “Pagliacci” by Ruggero Leoncavallo marks the start of Bärenreiter's new series “Masterpieces of Italian Opera” (MIO). “Pagliacci” was Leoncavallo's most successful work and to this day, it belongs to the core repertoire of opera houses worldwide. The role of the tragic clown Canio has enabled many singers to create memorable performances and iconic interpretations.

This new publication of “Pagliacci” which has been edited by Andreas Giger is the first edition to follow clear editorial guidelines, documenting all amendments and editorial decisions in the Critical Commentary. The opera is presented in two versions which, at the time, were both regarded as complete: the version Leoncavallo presented to the Italian publisher Sonzogno (one act, without a “Prologue” and “Intermezzo”) and the “final version” (two acts with a “Prologue” and “Intermezzo”), the conception of which was influenced by Victor Maurel, Sonzogno, as well as the experiences collected during the first series of performances. The new edition adheres to the autograph score of the composer as closely as current opera practice allows, correcting erroneous notes, articulation markings and slurs as well as proposing dynamics marks that were not included in previous editions. Additionally, problems concerning instrumentation have been solved.

There are secondary sources that contain many performance instructions which cannot assuredly be attributed to Leoncavallo. While previous editions mostly include these instructions, in this edition only those have been taken over which the composer authorized, which are musically justified, or which reflect the performance tradition and are of practical value (such as metronome markings or “puntature”). In all cases, they have been offset typographically from markings based on the autograph. An important source, namely a copy of the first printed score, contains corrections in the composer's hand. Bärenreiter's new edition is the first to offer this valuable information to performers and scholars.

The libretto for “Pagliacci” was written by Leoncavallo himself. Regarding the singing text and stage directions, the new edition takes into account the autograph as well as a number of other sources directly linked to the composer.

As a result of clearly stated and applied editorial guidelines, this new edition of “Pagliacci” offers a consistent musical text that adheres to Leoncavallo's intentions.