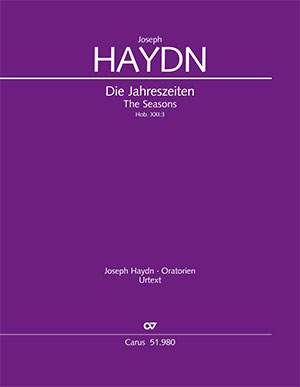 Haydn’s great late work in a modern Urtext edition. Joseph Haydn’s two late oratorios The Creation (Die Schöpfung) and The Seasons (Die Jahreszeiten) should in many ways be regarded as of equal importance. They have a close intellectual connection with each other: whilst The Creation paints a picture of the world coming into existence as in the account in Genesis, The Seasons is about the existence of the world over the course of a year, about how the meaning of creation applies in the actual life of people through the cyclical growth and decay of nature. In compositional terms, in The Seasons Haydn follows on from formal elements in The Creation in many respects, but at the same time continues these in independent, innovative ways. So here, a fresh and creative power is seen which is in no way inferior to that in Die Schöpfung.

For this edition the sources regarded as definitive, that is the original parts from the first performance and the first printed edition, have been consulted in a careful evaluation of the variant readings. In order to distinguish between the variant readings, passages and items adopted from the first printed edition are highlighted graphically. Thus a musical text is offered which can claim the greatest possible authenticity. The performance material is laid out so that various different original scorings can easily be realised. The material includes a harpsichord part for all the numbers, and a chorus score. The vocal score is based on the original reduction by August Eberhard Müller, which was specifically praised by Haydn, lightly arranged to conform with modern-day requirements.