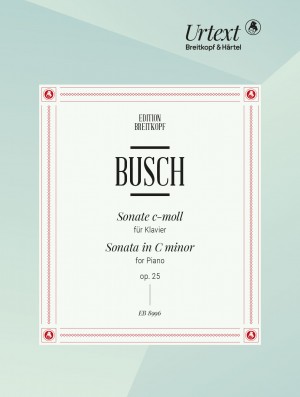 Adolf Busch is primarily considered one of the most important German violinists of the 20th century. Equally successful as a soloist and chamber musician, he founded the world famous Busch Quartet. The fact, that he was also an extremely prolific and accomplished composer besides being a virtuoso is relatively little known.

Up to today Adolf Busch’s compositions have had only a marginal place in the world literature canon, though they have recently been rediscovered, newly published and recorded. His chief works consist of chamber music, lieder, and orchestral pieces, but he also wrote a quantity of interesting piano music (about enough to fill a CD) showing various stylistic characteristics. His sonata Op. 25, the most extensive masterpiece in this genre, has now been made available in the present edition, suitable for both professional performers and advanced amateur pianists.