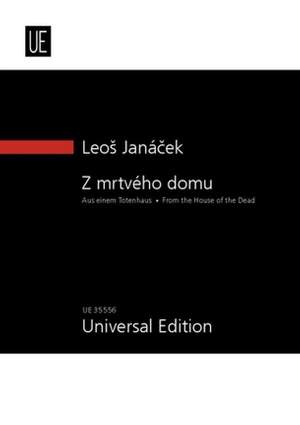 Janácek, L: From the House of the Dead (New Critical Edition)

<P style=BORDER-TOP-COLOR: ; BORDER-LEFT-COLOR: ; BORDER-BOTTOM-COLOR: ; BORDER-RIGHT-COLOR: >Janácek did not live to see his final opera “Z mrtvého domu” (“From the House of the Dead”) performed. The work was so different from his previous operas in its often chamber-like orchestration and its lack of an apotheosis ending that his pupils took it upon themselves to ‘revise’ it for its première in Brno in 1930, reorchestrating it and, most notoriously, rewriting the ending. Ever since the shortcomings of the original published edition became apparent there have been attempts to return to what Janácek left at his death. The new critical edition by John Tyrrell supplants the Mackerras-Tyrrell ‘provisional edition’ (1990) with a thorough-going revision based on the score made by Janácek’s copyists under his direct supervision and corrected by him. In his previous operas Janácek had the opportunity of making minor corrections to the score during rehearsals. Because of his death extensive tidying up of many inconsistencies has been necessary here. All such editorial interventions are shown as such and are described in the Critical Report.</P><br><P style=BORDER-TOP-COLOR: ; BORDER-LEFT-COLOR: ; BORDER-BOTTOM-COLOR: ; BORDER-RIGHT-COLOR: >Universal Edition introduces a new study score standard. These completely redesigned scores offer an unparalleled insight into the music of the last hundred years. Great care has been taken to select the best available content for this journey through music history, and every score has been edited according to the latest quality standards. <BR>The <EM>New Study Score</EM> series combines historic masterpieces with first-class editorial content, prefaces, and a highly legible, clean notation, all in the trusted Universal Edition quality.<BR></P>