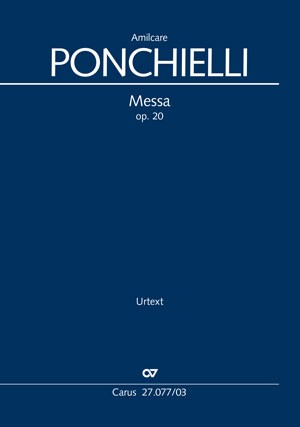 Amilcare Ponchielli (1834–1886) is known nowadays mainly as an opera composer and the composition teacher of Giacomo Puccini and Pietro Mascagni. He scored his greatest success in 1876 at La Scala Milan with the opera La Gioconda, a work which is still in the repertoire of the major opera houses. Ponchielli’s sacred works were composed in his later years, when he was maestro di cappella at the Basilica di Santa Maria Maggiore in Bergamo. There his Mass in A flat op. 20 (also known as "Messa per la notte di natale") was premiered on Christmas Day 1882. The Mass is captivating because of its flowing, singable melodies, rich harmonies, and warm tonal colors. The important role given to the chorus, with which the three male soloists interact closely, is striking. The first music edition of the Messa is a real discovery for choirs with good male voices; the second tenor part can largely be sung by the baritones.