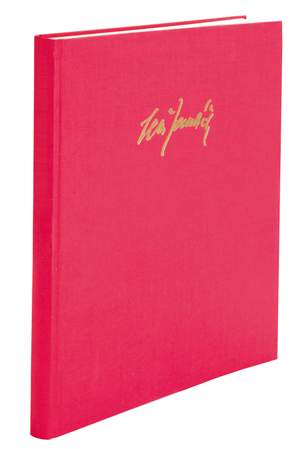 Janácek devoted a large part of his oeuvre to choral music, though the compositions in question are mostly for male chorus. This was due to his activities as a choirmaster and, to a certain extent, also the performance possibilities in Brno in his days with the excellent Moravian Teachers’ Choral Society. However, with the men drafted to fight in the Great War, the female Moravian Women Teachers’ Choir gradually began to give separate performances, and it is to this ensemble that Janácek turned his attention at the beginning of the wartime year of 1916.

It was the only time in his life when he composed for female chorus. In January he wrote Wolf-tracks according to the poem by Jaroslav Vrchlický, which was followed in February by the choral cycle with flute and harp accompaniment Songs of Hradcany from the eponymous collection of František Serafínský Procházka and the chorus Caspar Rutsky from the same poetry collection.Besides two volumes of male choruses a cappella, the complete critical edition now also includes a volume with female choruses. Its contents were taken from the original 2002 Editio Janácek edition based on a licensing agreement.