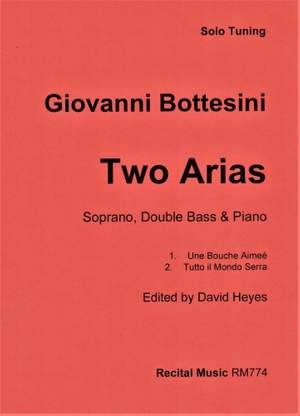 Giovanni Bottesini was the greatest double bass virtuoso of the 19th-century and many of his compositions for double bass are still at the heart of the solo repertoire. He spent much of his life in the opera house, as both conductor and composer, and his music is inspired by the lyrical, cantabile and virtuosic pyrotechnics of 19th-century Italian opera. He also transcribed a number of works for his own recitals and both arias are attributed to Bottesini, but are in fact by other composers. Une Bouche Aimee is originally by Charles Gounod (1818-1893) and is based on 'My Beloved Spake', for soprano, violoncello obbligato and piano. Composed in London in 1871/72 and setting words from 'The Song of Solomon', Bottesini transcribed it for voice, double bass and piano, transposing it into a lower key and adding new words. Tutto il Mondo Serra is a transcription of Frederic Chopin's 'Etude in C sharp minor' Op.25, No.7, originally for solo piano, but also transcribed by many others for different instrumental combinations. The words for both arias are by an unknown author and are unlikely to be by Bottesini. The double bass part in the piano accompaniment includes the original Bottesini bowings, and the printed solo parts are edited by David Heyes.