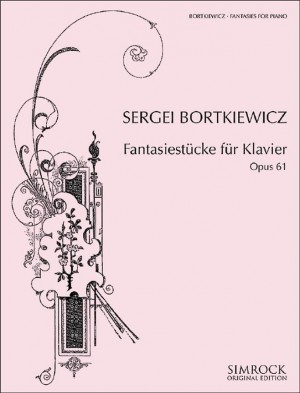 Sergei Bortkiewicz (1877-1952) continued the late-Romantic piano tradition with great melodic talent. After studying in St. Petersburg with Anatoly Lyadov and in Leipzig with the Liszt pupil Alfred Reisenauer, the native Ukrainian settled in Berlin. Political times blocked his career several times. It was not until in 1945 that he was able to regain his footing in Vienna. The Fantasy Pieces for Piano Op. 61 were to be printed in 1949 by the music publishers Benjamin, but again political circumstances were not in favour of Bortkiewicz. In 2013, the manuscript was discovered in the Saxon State Archive of Leipzig. This first edition finally makes Bortkiewicz's highly pianistic pieces accessible. The fantasy pieces do not deny the models Chopin, Rachmaninoff and Tchaikovsky and fascinate with Slavic tinted melancholy, paired with Viennese charm.