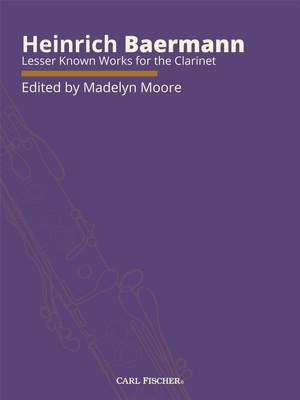 Heinrich Baermann (1784-1847) was one of the most celebrated virtuosi clarinetists of the early nineteenth century. While he is primarily known for having inspired some of the most revered pieces in the clarinet repertoire, it is not as widely acknowledged that he also often wrote and performed his own pieces. Dr. Madelyn Moore, Instructor of Woodwinds at Kilgore College in Kilgore, Texas, has compiled three, largely forgotten works by Baermann in this unique collection. Having pursued research on Baermann's unpublished works at libraries in Germany and Italy, Moore has presented her findings at conferences around the world, and it is her hope that by studying and performing these works, clarinetists will gain a better understanding of this important instrumental predecessor.