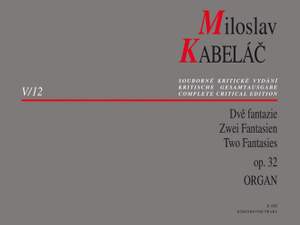 The Fantasy in D minor (No. 1) was written in 1957 by Miloslav Kabelác, one of the most influential composers of the twentieth century. The prominent Czech organist Jirí Reinberger initiated the composition. It was the composer’s first work for solo organ and the piece soon became a staple of international organ repertoire. The Fantasy in G minor (No. 2) was composed the following year on commission for the 1st International Organ Competition of the Prague Spring International Festival 1958.

Although both fantasies were given the same opus number, this is the first ever edition to include both of these works in one volume. It is part of the Complete Critical Edition of the Works of Miloslav Kabelác and edited by Jan Hora, a leading Czech organist and expert on Kabelác’s organ works which he recorded in their entirety.