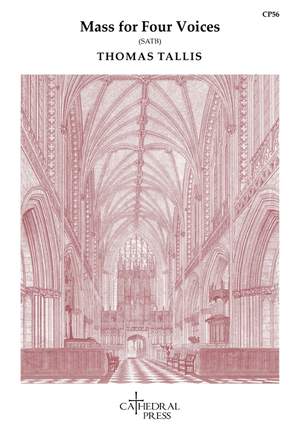 Tallis’s ‘Mass for four voices’ (a modern title) is thought to date from the reign of Henry VIII when shorter, more syllabic Mass settings became fashionable. It stands in stark contrast with earlier works such as the antiphon and associated Mass ‘Salve intemerata’ and the large-scale Masses of Taverner, and marks the beginning of the end for Latin polyphony in England before its restoration by Mary I in 1553. Earlier editions of this Mass have erred on the side of caution, correcting passages in the source deemed to be incompatible with Tallis’s style. Although the source as a whole has numerous scribal errors, many of these can be corrected without much difficulty. Moreover, this Mass exhibits a number of diatonic clashes similar to those found in Sheppard’s Mass ‘Be not afraide’, preserved in the same source. Both Masses are somewhat roughly hewn, and it is a matter of regret that no other concordant sources have come to light. It is also worth noting that Tallis’s Mass contains no passages of triple time, a break in continuity with settings of the previous generation. Although not a ‘parody’ Mass, there is considerable cross-quotation between the movements, indeed much more so than one would expect of a cyclical Mass. Compare, for example the lengthy passage at bars 60-96 of the Gloria and 61-97 of the Credo, among others. And if one were in any doubt as to the authorship of the Mass, the opening of the second invocation of the Agnus Dei (bars 28-32) is strongly reminiscent both of ‘A new commandment’ and ‘If ye love me’, English anthems thought to date from around the same time. The majority of pre-Reformation Mass cycles lack a polyphonic Kyrie, as this movement would have been sung to the designated chant of the day. ‘Kyrie Orbis factor’ in its authentic, troped form is included in this edition, along with the more familiar Gregorian form on the following page. The Amen of the Gloria will no doubt be familiar to those who sing the four-voice arrangement of Tallis’s Preces & Responses, where it is appended as the final Amen.