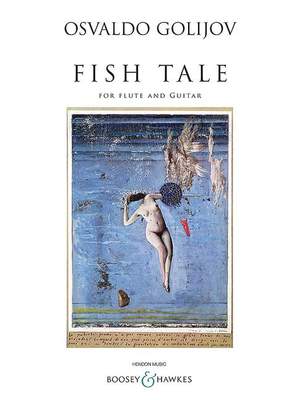 Editor’s note:When he finished writing Fish Tale, Osvaldo Gloijov called it a 'watercolor', a poetically apt description of its slippery, fluid, evanescent nature. It tells the surrealistic tale of the journey of a fish that begins in the ocean, stops to contemplate the sounds of an African thumb piano, continues on, propelled by the wind, which then becomes a tornado, leading to a waterfall, then is suddenly contained in a little fishbowl, and scurrying on to a long swim in a 'rainbow brook', stops to contemplate the passage of time, gets caught by a fisherman who fervently promises to return him to the water, dances a bit of samba, considers anew the passage of time with a sigh, and finally meets the love of his life at the bottom of the sea, dancing a slow waltz to the Brazilian folk music of a 'marine music box', which, like an oyster, opens and closes, to music and to silence.Fish Tale is a kind of 'love letter', as the composer wrote to me when he first sent the score. 'I wanted everything to be beautiful, even at the expense of some sense'. It demands to be played with passion and imagination.- David Leisner-