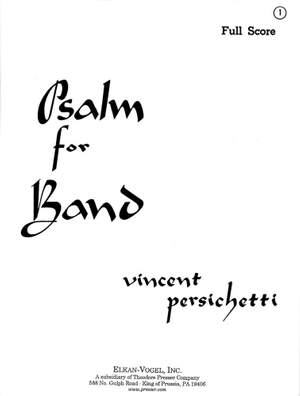 Psalm for Band is a piece constructed from a single germinating harmonic idea. There are three distinct sections - a sustained chordal mood, a forward moving chorale, followed by a Paean culmination of the materials. Extensive use is made of separate choirs of instruments supported by thematic rhythms in the tenor and bass drums. Psalm was selected for performance at the CBDNA Convention in December 1952 as one of the eight most outstanding compositions for band written in the previous several years. Theodore Presser Company editor Daniel Dorff, on the new Centennial Edition, explains, The 1954 Elkan-Vogel publication had a full score in a calligrapher's hand that was quite accurate,and a set of parts that was problematic in readability and accuracy. The present 2015 edition is faithful to and compatible with the original published score, with carefully and cleanly prepared parts bearing cues, easy page turns, and individual parts for each player.