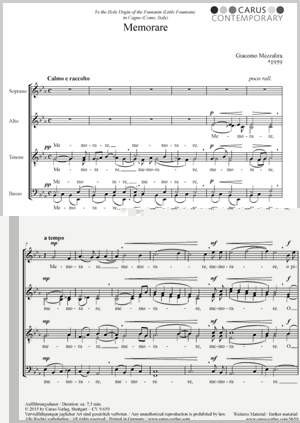 Mezzalira places his worked entirely in the tradition of Catholic church music: Gregorian elements are associated likewise with Palestrina's counterpoint and Bruckner's sonorous expansin. Thoroughly in the tradition of the motet, the Memorare is structured in four sections, each in accordance with their respective texts. This large structured composition begins in C minor from the depths of the men's voices, building to a song of lamentation which increases to an harmonically enriched E flat major passage on the words virgo maria. In the second section, harmonically in A flat major, Mezzalira places the upper and lower voices in a double choir opposed to each other inblock-like manner in order to develop resonating cantilenas in the third part, which is in F major. After a very simple, tender four-part setting of a hymn the composition ends with an Amen with large modally enriched chords in D major.