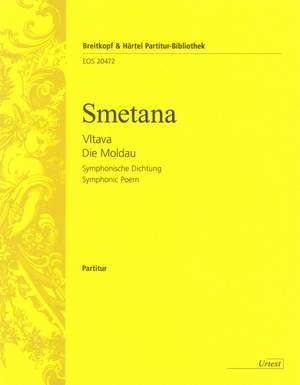 What is also amazing is that the first text-critical edition prepared by the Czech Smetana expert Milan Pospisil in 1999, which had entailed an exhaustive evaluation of the sources and been given a full text-critical editorial treatment as a Eulenburg study score, had no resonance of any kind among performers since no performance material had been published. After 15 years, Pospisils edition is finally being completed in a manner suitable for practice: with a conducting score and orchestral parts which will ensure that all future performances are based on a musical text that is as reliable as can be.

"The work depicts the course of the river Vltava, beginning with its first two sources, the cold and warm Vltava, and the confluence of the two streams that join to form a single river; then the course of the Vltava through forests and meadows, and through open countryside where a peasant wedding is being celebrated; water-sprites dance by the light of the moon; on the nearby cliffs castles, mansions and ruins rise proudly into the air; the Vltava eddies in the St John’s Rapids, then flows in a broad stream as it continues its course towards Prague, where the Vyšehrad appears, before the river finally disappears into the distance as it flows majestically into the Elbe."

Vltava ("The Moldau"), Smetana's best-known and most frequently performed orchestral work, was written between 19 November and 8 December 1874, at a time when Smetana was already completely deaf. The world premiere took place in Prague on 4 April 1875, but the score was not published until 1880.