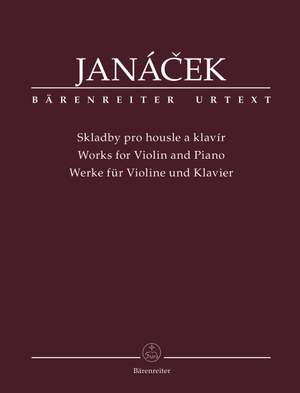 This edition contains all of Janácek’s works for violin and piano: the Sonata as well as the “Romance and Dumka”, composed while he was still a student. Though probably written as early as 1914, Janácek’s Sonata for Violin and Piano was revised several times before finally appearing in a definitive version in 1922.

This new edition of the Sonata and the “Romance” is based on the “Complete Critical Edition of the Works of Leoš Janácek”(Vol. E/1) with a clearer notation to optimise readability. For the Dumka the editor has drawn on the sole autograph source, the violin part (still considered lost when the above mentioned Complete Edition volume was published), and the revised version contained therein. Unlike the first edition, it also contains Janácek’s detailed dynamic markings.