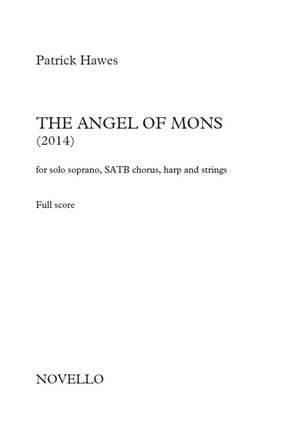 This is the Full Score for composer Patrick Hawes' beautiful work The Angel Of Mons , featuring all six movements. This work is arranged for solo Soprano, SATB Chorus, Harp and Strings, and was composed in memory of the British soldiers who supposedly witnessed an apparition of an angel during World War I. The premiere of The Angel Of Mons  was on 23rd August 2014 in St Michael and All Angels Church, Edenham, Lincolnshire and conducted by Patrick Hawes  himself on the exact centenary of the apparition of the angel. The inspiration comes from a mythical story around the Battle of Mons during World War One, where a group of soldiers supposedly received divine help from'angels'. The story arose from a fictional short story by a writer that came to be known as fact, despite the author's desperate pleas otherwise. The work lasts approximately 25 minutes and therefore would make for a hugely enjoyable concert, especially a World War I memorial concert.  The Vocal Score can also be purchased separately  here.