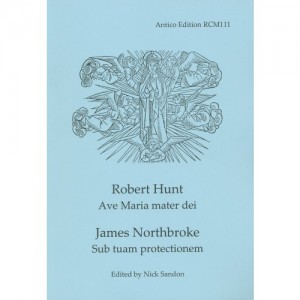 Robert Hunt may have been a chorister at Magdalen College, Oxford in the late fifteenth century, but no other information about him is known. James Northbroke was a secondary at Exeter Cathedral during the second decade of the sixteenth century and clerk of the Lady Chapel there between 1526 and 1531, when he took the Oxford B.Mus. This volume contains a short votive antiphon by each composer. Ave Maria mater dei is a freely-composed setting of a text that was also set by William Cornysh. Sub tuam protectionem has as its cantus firmus the faburden or bass line that was sung below the texts plainchant melody when this was sung in improvised polyphony; a reconstruction of a faburden performance is also included in the edition. For five voices: SATTB. vi + 14 pages.