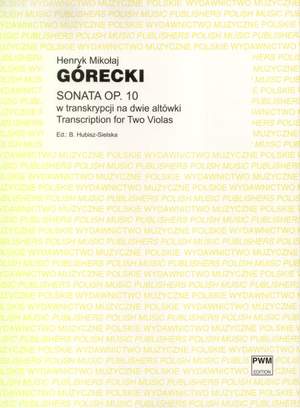 In 1957, the then 24-year-old Henryk Mikołaj Górecki composed the Sonata op. 10 for two violins, dedicated to Jadwiga Rurańska, whom he married two years later. This early work already bears such marks of the later masterpieces of one of the 20th centurys most distinguished artists as: sharp contrasts, sudden accents (1st movt.); an energetically pulsating, rhythmically-driven dialogue (3rd movt.); and a lyrical phrase shaped with extraordinary subtlety (in an unsophisticated rhythmic language), maintained in piano dynamics (2nd movement).

Each of these elements can be perceived as a germ of later compositions representing such strong accents in the 20th-century symphonic literature as, for example, Scontri (1960) or the extraordinarily spiritual Symphony no. 3 (1976).

The present transcription for two violas is exclusively a transposition of the work a fifth down, which in no measure detracts from its concept, but gives it a slightly deeper sound. In this edition, we have also given proposed fingerings and bowings. [Bogusława Hubisz-Sielska]