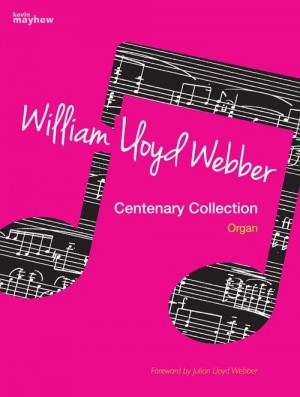 Arranged here for Organ, the Centenary Collection celebrates the life and works of the British organist and composer William Lloyd Webber.

Born in 1914, by the age of 14 Lloyd Webber had already become awell-known Organ recitalist, giving frequent performances at many important churches and cathedrals throughout Great Britain. He won an Organ scholarship to Mercer's School, later winning a further scholarship to the Royal Collegeof Music, where he studied composition with Ralph Vaughan Williams and gained his FRCO diploma at nineteen.

Parallel to his activities as an organist, Lloyd Webber began to compose and, from 1945 to the mid-1950s, he wrotemusic in many different forms: Vocal and instrumental, Choral and Organ, Chamber and Orchestral. Some of his best known works include the oratorio 'St. Francis of Assisi', the Orchestral tone poem 'Aurora', the Sonatinas for Violaand Piano and Flute and Piano, and numerous songs, Organ pieces and Choral works.

Showcasing Lloyd Webber as a composer who was true to himself and who fully embraced his signature style, the music in the CentenaryCollection is romantic, melodious and – above all – heartfelt.