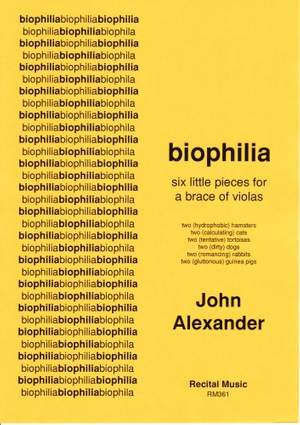 Alexander: biophilia - six little pieces for a brace of violas

The composer writes: 'Originally, and many years ago, I wrote a number of small piano pieces for my young children - now in their late thirties/early forties and who are the dedicatees of this overall work. I selected six that were mostly in two parts, and arranged or adapted them as double bass duos for Bass-Fest 2006 at Sherborne (Dorset). I have also rearranged them again, for two violas, principally because I had a request for such music from Jessica O'Leary and her Viola Club at Junior Guildhall School of Music & Drama in London. I first came across the term 'biophilia' some years ago in a marvellous book called 'Nature Cure' by Richard Mabey, who explained that it was the entomologist and conservationist Edward O. Wilson who popularised the word 'biophilia' as a description of the pervasive affinity we humans appear to feel for animals and other creatures. Wilson writes optimistically in the prologue to his book, Biophilia (Harvard University Press, 1984), "...to the degree that we come to understand other organisms, we will place a greater value on them, and on ourselves." The images I offer here in the individual titles of these six little duos are nothing more than possible metaphors for our own various human states, related to and through our potential fondness for a range of domestic pets. Such animals often become our earliest contact with, and thereford a dawning awareness or acknowledgement of, other species, together with a possible innocent introduction to a much larger biophilia picture.' These six pieces can be played in any order, and in any groupings, at the player's discretion and are also available for double bass duo and cello duo.