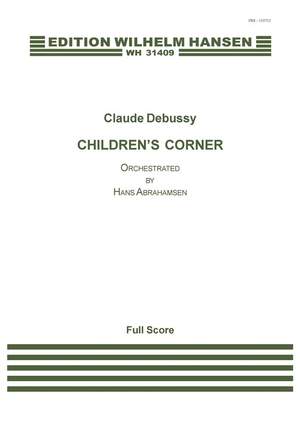 Dedicated with affection to Amalie Malling and Michael Schønwandt. I Doctor Gradus ad Parnassum II Jimbo’s Lullaby III Serenade of the Doll IV The Snow is Dancing V The little Shepherd VI Golliwogg’s Cake Walk The orchestration by Hans Abrahamsen of Children’s Corner by Claude Debussy was commissioned by Radio KamerFilharmonie to celebrate Debusy at 150 in 2012. Arranged in 2011, it was then premiered by the Radio KamerFilharmonie conducted by Michael Schønwandt in Utrecht in February 2012. Debussy’s six movement work for piano has been cherished the world over for its whimsical charm and the way in which they are evocative of childhood. Abrahamsen expands on these traits inhis orchestration of the six little masterpieces, be it the mystical heaviness of Jimbo’s Lullaby, the icy pirouettes in The Snow is Dancing or the buoyant ending: Golliwogg’s Cakewalk