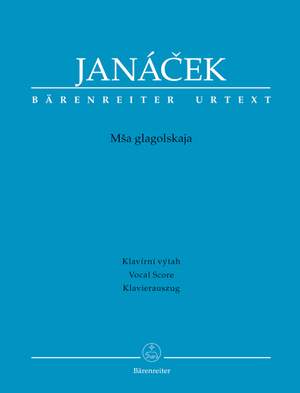 The Glagolitic Mass, one of the 20th century masterpieces of sacred music, has a very complex genesis and constitutes an intricate editorial challenge.

The recently published scholarly-critical edition presents two different versions of the work in two separate volumes: the “September 1927” version (BA 6863) which the composer completed before the first rehearsals and subsequent premiere in Brno and the version he partly reworked for the first Prague performance in April 1928 (BA 6862). This second version was then revised further and published after Janácek’s death by Universal Edition Wien in 1930. Known as the “final authorised version”, it has been newly edited for this publication which is based on the engraver’s copy of the score prepared by Janácek’s regular copyist Václav Sedlácek.

The “final authorised version” is the significant version and most suited to performance purposes. The instrumentation is richer, it is more straightforward to rehearse and several important passages are more coherent than in the earlier version. It is the later version that is presented in the vocal score. The Old Church Slavonic text has been prepared by the slavicist Radoslav Vecerka.