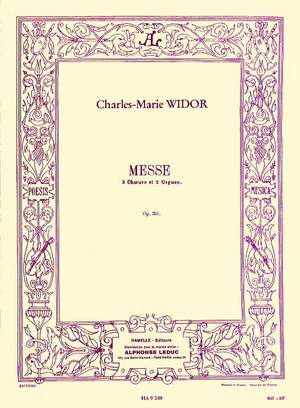 Charles-Marie Widor (1844-1937) composed this Mass, Op. 36 in 1878 for the St Sulpice church in Paris. The initial two choirs for which it was composed were comprised of around 200 and 40 voices, whilethe score for this version is for a choir of baritones and an SATB choir. The Organ part requires an advanced-level of ability as it contains some difficult parts.

Divided into five sections, the entire work has beentransposed one half step lower ‘to avoid the awkward key of F sharp major’. These sections are:

This really delicate and emotive Mass, Op. 36 is a piece that stands out by itsmajesty.

Charles-Marie Widor was a great organist who did not only focus on Organ composition. From orchestra pieces to chamber music, he wrote various different compositions, including 10 symphonies forOrgan, some Operas, and some Piano Concerti.