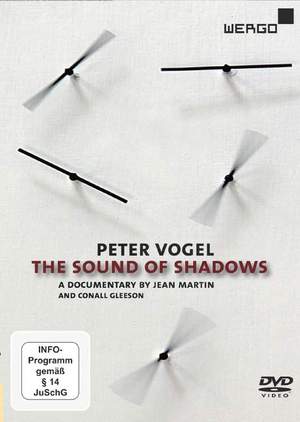 a documentary by Jean Martin and Conall Gleeson

On this DVD WERGO presents the extraordinary documentary “The Sound of Shadows” together with a performance of Peter Vogel’s “Sound Wall”. Peter Vogel’s works fuse art and science in a unique way. His “sound walls” are six-metre-long wire sculptures that have been affixed horizontally to a wall at eye level. Equipped with dozens of sensors which respond to sound, light or movement, the “sound walls” become play objects: The observer himself creates or improvises a composition, based on predefined sound material, through his movements. It is only through this interplay between observer and “sound wall” that the work is completed. Correspondingly, Peter Vogel describes the idea of his “sound wall” as interactive “environment”: “The environment represents a place of the audience's activity … The observer's scope of action consists in the activation or non-activation of the environment …, in the speed of his movements, his responsiveness, in the rhythm of his movements – in short, in his individual ability to structure motion in time and respond to musical structures.” This documentary by Jean Martin and Conall Gleeson features Peter Vogel during an exhibition in Paris as well as in his Freiburg studio. Here he talks about the aesthetic approach to his art, presents sound objects and explains circuitry. In addition, the documentary includes statements of David Toop (curator and writer, London), Matthias Osterwold (artistic director of the MaerzMusik Festival, Berlin) and Helga de la Motte (musicologist) about Vogel's art. Language: English Subtitles: German Sound format: Stereo Video format: PAL SD Country code: Europe Length: ca. 42 min.<br><br>Jean Martin, Conall Gleeson: directors / Maurice Eberl-Rothe: camera / Felix Nelson: editor / Jean Martin, Susanne Elgeti, Conall Gleeson: additional camera / Tim Rosemann, Jean Martin: sound / Jean Martin: sound design / University of Brighton, Faculty of Arts: funding / Jean Martin, Phil Archer, Thor Magnusson: essays / Helga de la Motte, Matthias Osterwold, David Toop, Liliane Vincy, Yuri Vincy: interviewees