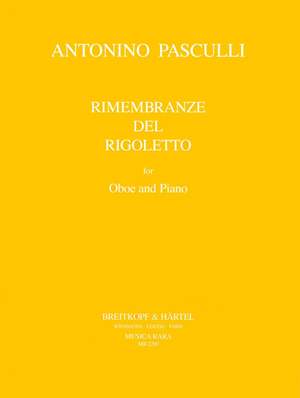 The musical world owes the "Rimembranze del Rigoletto" to the deplorable situation of the underemployed virtuoso: Antonio Pasculli found that there were too few pieces in the oboe literature of his time that were up to par with his abilities. He thus wrote his own pieces, just as Paganini had done before him. The fact that Pasculli's "Rigoletto" variations were heavily inspired by a similar transcription made by his contemporary Giovanni Daelli suggests that the busy performer granted himself little time for composing. Pasculli apparently also did not try to find a publisher. And so his technically demanding "Rimembranze" are 2003 being published for the first time as part of the Musica Rara collection, where they take their place alongside five other oboe works by Pasculli.