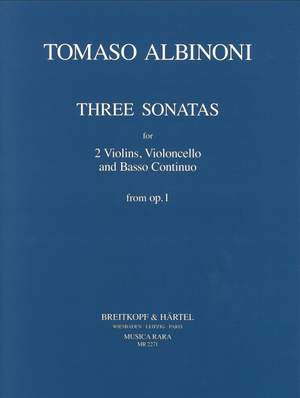 At the end of the 17th century, having a trio sonata collection printed as one's opus 1 was seen as the proper thing to do for an Italian composer. Corelli set the pace, and Tomaso Albinoni willingly joined the fray. His works of 1694 were so exciting and beautiful that they had to be reprinted several times. The occasionally independently led violoncello part was no doubt one of the features that made the pieces so attractive. Albinoni's opus 1 was so widely disseminated that it even made its way to Johann Sebastian Bach, who lavished all of his contrapuntal art on his arrangements of three themes from fugal movements of these pieces in his harpsichord fugues BWV 946, 950 and 951. Based on the first edition (Venice), this new edition of the first sonatas makes available once again three impressive works from Albinoni's debut opus.