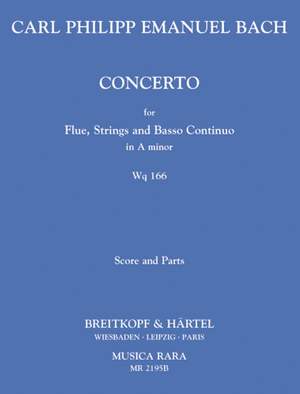 The concertos in A minor, B flat major and A major constitute a small but amazingly flexible group in Carl Philipp Emanuel Bach's work catalogue. They were written as violoncello concertos between 1750 and 1753, and have all been transmitted in alternative versions as flute and harpsichord concertos as well. C. P. E. Bach wrote the Cello Concerto in A minor Wq 170 at the Berlin court of King Frederick the Great. The flute version Wq 166 was probably written shortly thereafter, even if the only surviving source dates from after the composer's death. We can see how interchangeable the solo instruments were through the amazing circumstance that editor Ulrich Leisinger was able to draw upon the version for harpsichord solo Wq 26 for this new edition. The cadenzas to the first and second movements proved to be easily adaptable to the flute, which should inspire soloists to create their own versions.