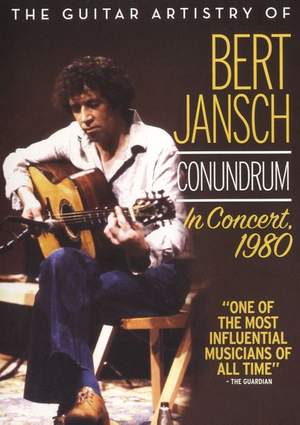 After Pentangle split in 1973, Bert Jansch returned to his prolific solo career but missed playing in a group context. The Bert Jansch Conundrum came into existence as the 1970s waned. Jansch recorded a solo album called A RareConundrum in 1977, with mandolinist Rod Clements and fiddler Mike Piggott as supporting players. When Piggott was unable to go out on a Scandinavian tour, Martin Jerkins hired on to play violin on the dates. They hit it off andNigel Portman-Smith came aboard to play bass. They toured Europe and America. Bert recalled: “I got to know Martin in that period between the original Pentangle splitting up and the beginning of the eighties. I knew him prettywelland we did a lot of gigs together. At one point we were playing with Rod Clements, who used to be in Lindisfarne and Pick Withers on drums - I seem to remember Mike Piggott was involved as well; I’ve been in so many differentline-ups I just can’t honestly remember!”

The first part of this DVD collection presents Bert Jansch Conundrum in concert, recorded in Athens, Ohio. This is followed by three tunes by Bert and Martin recorded in 1978 inStockholm, Sweden. The DVD concludes with a documentary that Bert recorded in 1985 that combines interviews, solo concert performances and rehearsals.