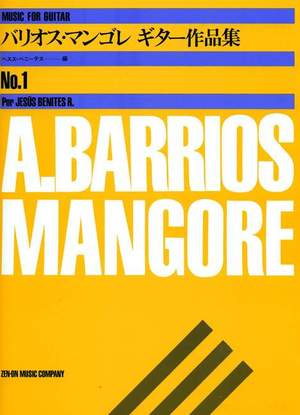 Agustin Pio Barrios Ferreyra, a Paraguayan composer and guitarist, is nowadays known as the creator of the Mangorean or Indo-American school of the Guitar. ‘The name, Mangoré, was adopted in honor of the great chieftain Mangoré, an important personage of the Paraguayan jungles’.Mangoré used for his works popular folkloristic themes of South America as well as sounds of nature (‘the still waters of […] the Amazon’, ‘the song of the birds’). But Magnoré also was inspired by European music: He composed gavottes, minuets and waltzes: ‘It was in J.S.Bach where Barrios discovered the source of his universality […]’.Admired by many but despised by more was his way of stringing his guitar: ‘[…] the way he attacked the strings with the fingers sideward, with very little use of the fingernails’. He also invented some kind of a muffler: He put ‘small balls of rubber on the Pirastro steel string’. Jesus Benites R. who collected Magnoré’s works for this edition says about him: ‘Magnore is the genius of South America’. He was a strong influence for many composers and musicians, such as Heitor Villa-Lobos, Manuel Ponce and Andres Segovia. Vol. 1 of this 4 book collection contains 23 pieces, including Chôro da saudade, Danza Paraguaya, La Catedral and Madrigal (Gavota).