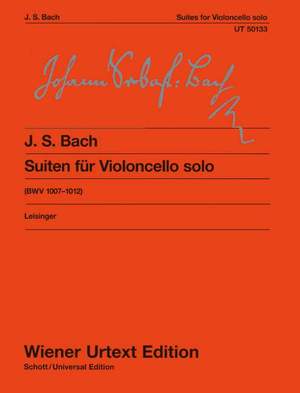 Edited from the sources

Johann Sebastian Bach's Six Suites for violoncello solo represent an equal counterpart to his six sonatas and partitas for solo violin - in the 18th century they were even played on the piano. They have come down to us in an earlier and a later version. As the result of a musicological source revaluation this new edition accords considerably greater importance to the later copies than previously. To all appearances they seem to more clearly reflect Johann Sebastian Bach's intentions in particular in respect of the problematic slurring than the sources for the older version. Difficult page turns within movements have been carefully avoided through sensible pagination.